The Astrological Psychology Association: The Huber Method of Astrology

The Astrological Psychology Association (APA) was founded on 8 June 1983, at 12.30pm, in London, to enable English-speaking students to study and use the psychological approach to astrological interpretation developed by the Swiss couple, Bruno and Louise Huber.

Bruno and Louise Huber became interested in astrology in the 1940s and, after Bruno heard Roberto Assagioli lecturing at the Psychosynthesis Institute in Florence, he changed from studying science to psychology and philosophy. For several years the couple undertook client-centred research with Assagioli, whose publications include The Act of Will and Transpersonal Development: The Dimension Beyond Psychosynthesis. They are also indebted to Alice Bailey’s Esoteric Astrology.

The Hubers united the threads of astrology and psychology in a system of precise calculation and interpretation, incorporating the 30-degree aspect orbs of the Ptolemaic universe and the law of the golden mean to calculate the intensity curves of the houses, as well as the findings on planetary stress of the twentieth-century statistician Michel Gauquelin, and the house system popularised by Dr Walter Koch. The Koch system underlines the uniqueness of each individual born at a specific time and place, lending itself to differentiated psychological analysis.

‘The Huber Method’ is a non-predictive approach to astrology, focusing on self-understanding, personal and spiritual development. It emphasises the visual chart image, with elemental and motivational colours, and its aspect patterns creating a picture that resonates to the individual. The chart can also be seen as a ‘Life Clock’ which, through the Hubers’ innovative method of Age Progression, enables significant growth points and phases of psychological development to be identified and explored.

Further information about the APA and ‘The Huber Method’ can be found at http://www.astrologicalpsychology.org and http://www.hopewellpublisher.com 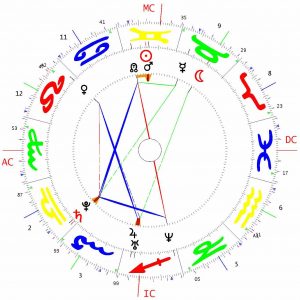